The Disability Support team is working with Action on Hearing Loss to ensure those with hearing difficulties can make the most of their time at City. This includes deaf awareness training for support staff and the introduction of Portable Induction Loops (PILs) for students, staff and visitors with hearing loss.

PILs are available for students and staff to keep with them throughout their time at City and can also be borrowed on a daily basis, including by visitors, from these locations across the University:

The technology used is the Phonak Roger system. This includes the Roger Pen, a modern, sleek and elite amplifier which comes with a powerful transmitter, meaning you can hear from up to 20 metres away. The system features a discreet wireless microphone, used by the person speaking and a MyLink neckloop receiver suitable for use with any hearing aids/cochlear implants featuring a T-Coil setting.

The Roger system enables people with hearing loss to hear and understand many more words than ever before. It could mean that they no longer need to struggle in lectures, big group meetings, on conference calls, or when there is lots of background noise. They can simply listen and get involved.

The Roger system features a discreet wireless microphone, used by the person speaking, and a MyLink neckloop receiver that simply connects to your existing hearing aids, cochlear implant or Baha.

You hear the speaker's words directly in your ears, without any distracting background noise. 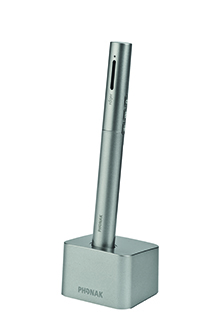 The Roger Pen is a discreet, cutting-edge, wireless microphone with fully automated settings that boosts both single and group conversations. It features Bluetooth for easy mobile phone conversations and can also be used to hear audio from other sources like TV, Skype calls and video conferences. Placing the Roger Pen on a flat surface such as a table automatically activates its 360-degree (omnidirectional) microphone setting, which picks up voices from all around. The pen also comes with a lanyard so it can be worn around the neck which is ideal if you are out and about. Or when it's noisy and you want to focus on the words of one colleague over distance, hang the Roger Pen around their neck. This focuses the Roger Pen's microphone automatically on only their voice. When you're in a large group of people, like a conference or seminar, hold the Roger Pen like a reporter's microphone and point it at the person speaking to 'zoom in' on their voice. This `zooming' also works when you want to understand a single person speaking softly and over distance. 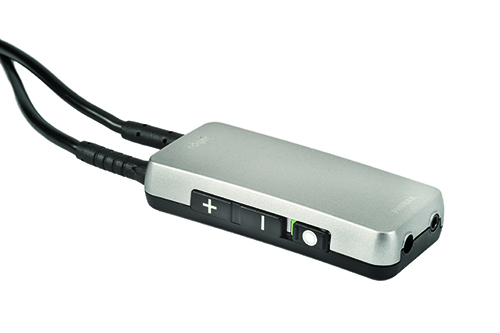 The Roger MyLink is an easy-to-use receiver suitable for use with any hearing aid featuring a T-Coil. The MyLink is worn around your neck and when it is switched on, your hearing aids needs to be set to T/MT/T-Coil mode. The sounds you want to hear are then directly transmitted to your hearing aid.

The Roger Mylink has:

It can also be connected directly to your TV, MP3 player, HiFi and be used with your Bluetooth mobile for hands free operation.

Some individuals may already have Phonak hearing aids and alternative receivers may be more suitable. This will be assessed on a case by case basis. These discreet click-on Roger receivers attach directly to your hearing aid. With several categories of Roger receiver available there is a solution for every listener, whatever hearing technology you currently use. These receivers can be connected remotely to the Roger Pen transmitter.

How to get a Roger system

Student who require a Roger system should contact the Disability Support team in Learning Success to find out more.