The University and College (Trade) Union (UCU) will be taking a period of strike action of 18 days in February and March.

You can find more on what this means for you, your classes, our campus and more on our industrial action at City page.

Meningococcal disease is a life-threatening infection. It is a term used to describe two major illnesses - meningitis and septicaemia. These can occur on their own or more commonly both together.

The recognition mark demonstrates that this university is: 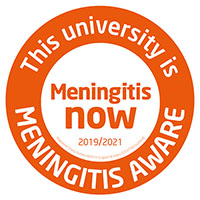 What it is and how to recognise it.

What are meningitis and septicaemia?

Meningitis is inflammation of the membranes that surround the brain and spinal cord. These membranes are called the meninges and they help protect the brain from injury and infection.

Septicaemia is a severe infection of the blood. Bacteria multiply in the blood, releasing endotoxins that cause widespread damage to the body

Meningococcal disease is caused by meningococcus bacterium. There are 5 main groups: A,B,C,W and Y that are responsible for the disease around the world.

Whilst it can affect anyone at any time, there are particular risk factors that increase the possibility of meningitis in students - especially those in their first year.

How do you get meningococcal disease?

Although a serious infection, it is not particularly infectious. One in four young adults carry the germs, which cause meningococcal disease in their throats without ever getting ill.

In a small number of people who have no immunity to the bacterium, it can travel into the bloodstream and cause meningococcal disease.

The bacterium which causes meningitis dies quickly once outside the body and hence close, direct contact is needed to transfer the bacterium in nasal or throat secretions from one individual to another.

This bacteria is passed from person to person by coughing, sneezing and intimate kissing. Outbreaks occur in places where people live or work in large groups.

Around 25% of adolescents carry the meningococcal bacteria in the back of their throats, compared to approximately 10% of the UK population. Most carriers do not become ill and usually develop some immunity to these bacteria. In an age group where more people are carrying the bacteria, there will be more disease

MenW disease has historically been rare in the UK, but since 2009, year on year cases have increased. A particularly aggressive strain of Men W is causing disease in all age groups but there has been a rapid increase in university students

University freshers can be more vulnerable because of living in cramped housing or halls of residence. Young people come together from all over the world to study, live and socialise together. They can be exposed to bacteria and viruses their bodies have not met before. This is why so many new students get ‘fresher’s flu’

In a recent Meningitis Now survey, 90% of people aged 18 to 24 years said they had heard of the disease, yet only a quarter knew the signs and symptoms, and 60% said they didn’t know they were at risk

There was general lack of awareness of the sign and symptoms of meningitis amongst students.

Going off to university is often the first time young people are living away from their parents and their own health and wellbeing is not always a priority. With no parents to keep an eye on their health, meningitis can be missed.

How do you recognise meningococcal meningitis/septicaemia?

Meningitis is not easy to identify at first because the symptoms are similar to those of flu or a hangover. However, it can develop rapidly, sometimes within hours, to a very serious illness.

Because someone with meningitis may not be aware of how serious their condition is, it is important to look out for friends who may have flu-like symptoms and check for any of the following signs or for a rapid deterioration.

If someone does not come out of their room, check to see if they are OK.

Knowing the signs and symptoms of meningitis and septicaemia, remaining vigilant and getting medical help quickly can save lives.

Meningitis symptoms can appear in any order. Some may not appear at all. Early symptoms of meningitis can include:

As the bacteria multiply rapidly in the bloodstream, they release endotoxins, which damage the blood vessels. This results in the more specific symptoms of septicaemia:

The increase in MenW in recent years led to the introduction of a MenACWY vaccine which is currently being offered to all 14-18 year olds and to first time students. The vaccine protects against disease caused by four of the main groups of meningococcal bacteria - A, C, W and Y.

The vaccine is offered to first year university students under the age of 25 – your GP can advise on eligibility. It is advisable to get this at least two weeks before arrival at university. Remember, no vaccine will offer complete protection from meningitis. Vigilance is vital.

Students are strongly encouraged to get the vaccine from their GP.