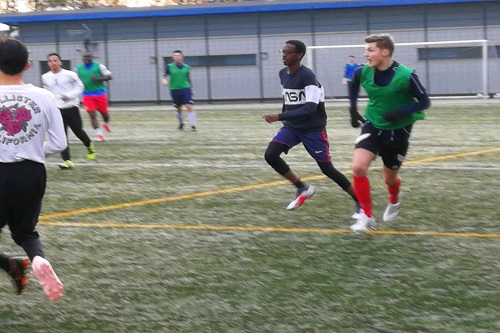 KICL prepares international students from around the world for study at undergraduate and postgraduate level across the UK. This year is the 10th anniversary of the partnership between City and KICL and in 2018/19 76 KICL students progressed on to courses at City.

Despite the KICL team being decisively beaten, 20:1, the game strengthened links between the two institutions and both sides entered into the competitive spirit. Vanesa Carralero-Lozano, Social Activities Coordinator at KICL commented: “Despite the score… we are very happy with the whole experience. From the quick and great organisation from the City team’s captain to the understanding and fair play from the whole team… it has helped to bond our KICL team players closer. We hope next year we have the chance to show the evolution of the team playing another #London Derby against such a great team.”

Liam Kingsmill, Vice-Captain of City’s Football team gave his view of the game: "Despite the cold weather it was a great occasion to play some football and to meet some prospective students from Kaplan looking to attend City. The game was played in good spirits, and hopefully gave the students an insight into what it would be like playing for City’s 1st team. Hopefully we might even see a few of the students in our team next year!"