Give blood - appealing for donors and updated eligibility rules 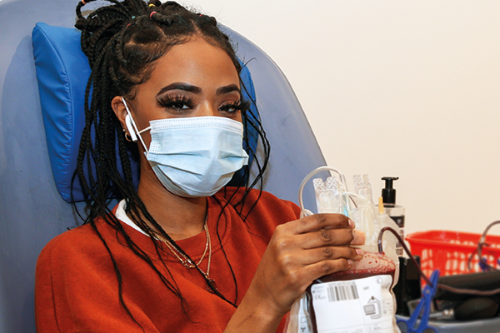 Donating your blood could save more than three lives.

United by Blood: Donating in memory of Evan Nathan Smith

A campaign, United by Blood, has been created by a coalition of Black community organisations to strengthen the work done in educating the Black community around the importance of blood donation and blood disorders.

A key part of the campaign has called for more people from Black African and Black Caribbean backgrounds to register and become regular blood donors following the passing of City alumnus, Evan Nathan Smith.

In 2019, 21-year old Evan, who had studied Financial Economics at City, tragically died in hospital after suffering a Sickle Cell crisis. At an inquest it has been announced his life may have been saved if a blood transfusion had been given when he requested help.

With Black donors being ten times more likely to have a blood type needed to treat the 14,000 people in the UK with sickle cell and also more than 1,300 new Black donors being needed every month for life-saving treatments, the current shortage makes it harder to find the best match blood for Black patients.

A series of special blood donation sessions were recently held across the UK for the campaign on World Sickle Cell Day (19th June) and Father’s Day (20th June). Although these have now passed, you can still donate for people like Evan at any point.

As of Monday 14th June, in line with World Blood Donor Day, new eligibility rules that will allow more men who have sex with men to donate blood, platelets and plasma also came into effect, marking a historic move to make blood donation more inclusive while keeping blood just as safe.

Eligibility will now be based on individual circumstances – regardless of gender – surrounding health, travel and sexual behaviours evidenced to be at a higher risk of sexual infection, rather than donors being asked if they are a man who has had sex with another man. Notably, anyone who has had the same sexual partner for the last three months will be eligible to donate.

The changes to the re-named Donation Safety Check form will affect blood, plasma and platelet donors, however, the process of giving blood will not change.

To learn more about this, you can read the news item here.

To register as a donor or for more information on full eligibility, you can visit the Give Blood website. Alternatively, you can call them at 0300 123 23 23.