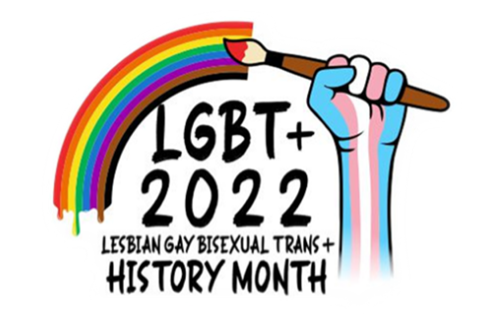 Celebrate LGBTQ+ History this Febrauary at City and beyond.

LGBTQ+ History Month is about recognising the communities’ rich history, civil rights movement, lives and experiences to promote equality and diversity for the benefit of the public. It aims to increase the visibility of lesbian, gay, bisexual, transgender and queer people in the educational curriculum and to promote the welfare of the community by creating safe spaces.

This year’s theme stems from the popularly used slogan during the early Gay Rights Movement: ‘the personal is political’. With art being one of the biggest forms of personal expression, the subject has been chosen as this year's National Curriculum link and to feed into the theme of 'Politics in Art'.

With this theme in mind, a spotlight on five artists has been made, one to each represent the L,G,B,T and ‘+’ of the community) who had used their talents to either express their orientation or for political ends. The Five Faces of 2022 are:

As this year’s anniversary is one on a continuing and often exhausting journey towards full equality, which has suffered many setbacks yet continues to move forward, the tagline is ‘the arc is long’, taken from Martin Luther King Jnr’s quote ‘the arc of the moral universe is long but it bends towards justice’.

There are many ways to get involved this year, including a badge designing competition (where your art could be on next year’s badge!) and events for those specifically interested in LGBT+ History.

Be sure to regularly check back here as we update what's happening throughout the month.

The Students’ Union have arranged training sessions specifically for students on the following topics:

The SU will also be handing out pronoun badges from the SU Reception desk throughout the month and students and staff can download pronoun email signatures to add into their digital sign-offs.

The library has produced a book and information display on Level 5 of Northampton Square Library and in the Law Library for the month. For students unable to come to campus, they have also produced a blog post that will feature an e-book carousel which is all readable through the library's digital collection and can be found on the CityLibrary News blog.

As part of last year's Pride month activies, the team also developed an amazing playlist of LGBTQ+ themed films and TV programmes which is still accessible and call all be viewed using the University's subscription to Box of Broadcasts (within the UK only).

Lastly, the Library runs a book-purchasing scheme called Liberating CityLibrary, which runs all year round and members of the City community can suggest titles by about about marginalised authors and groups for the Library to purchase. What better time than LGBTQ+ HM to expand City's collection!

Islington's Pride have developed a Heritage Map of LGBTQ+ spots throughout the borough including around our campus in Northampton Square. If you're on campus or in the local area, why not take a break and uncover the queer history around City.