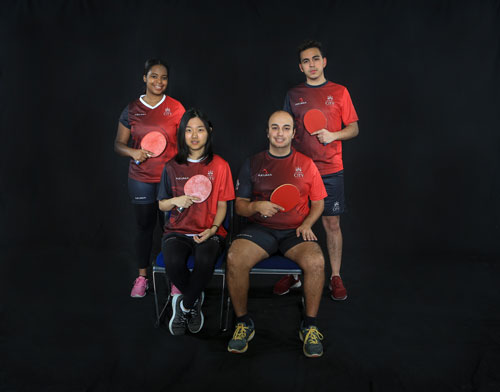 Do you enjoy playing table tennis and meeting new people? Constantly training and competing to further improve your ability? Then join the Table Tennis Team at City. Table Tennis is a brilliant sport, requiring quick reflexes and nerve as the ball regularly hitting speeds in excessive of 40 mph. We have our training sessions weekly at City Sport, just round the corner from the University. If this sounds like something you would enjoy, come for a try-out session and let us see what you’ve got! We've got a men’s and a women’s team entered for this year and would love for you to join us.

The table tennis club is a great way to meet new people and show off your skills! Table tennis requires some of the fastest reaction times of any sport, It can improve your hand-eye coordination and is physically demanding. You can use the social sessions for fun with no commitment necessary or try out for the team if you want to play more competitively. I have played for the City University  team for two years and have enjoyed every second of it! You get the opportunity to compete against other London Universities in the league and the Conference Cup. We hope to go for double success this coming year!

Go to CityActive for information on how to sign up.