Join us and support the City Wolfpack as they battle it out in a brand-new 3 match Varsity series against Kingston University, in ten different sports across two days.

The 2018/2019 season brought with it the final of a three match Varsity series against Kingston University.

Having already secured a 2-0 lead in the series, City were keen retain the Thames river trophy once again, and win the series undefeated.

Thirty-six teams competed in ten different sports across three days of sporting action. Cheered on by the sporting community and with a special appearance by CityWolf, the official students’ sports mascot, City were once again victorious, winning 37-35, taking the clean sweep in the series. 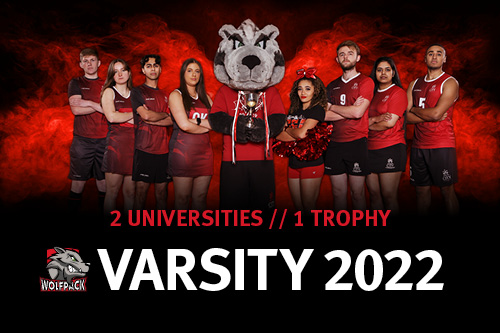 After a 2 year hiatus due to COVID, Varsity returned in 2022 to begin a new three-year series. City University were successful with a convincing 11-6 victory in the first year of the new series.

City took three points after day one with a clean sweep in Badminton. Both the Men & Women sides took a victory alongside the mixed team, meaning City would walk into day 2 with a 3-0 lead.

Day 2 started with Tennis, the women’s side added another point with the men’s slipping to a narrow defeat and the weather unfortunately lead to the mixed fixture being voided.

The Men’s Football had a mixed day with the 2nd team losing a close encounter and the 1st team winning. Men’s Rugby could not get the job done against a very strong Kingston side.

Netball 2nd lost a closely contested fixture but there were brighter notes to with Men’s Hockey bringing home a victory meaning that City were in the driving seat going into final day with a 6-4 lead with everything still to play for.

It was mixed fortunes for Volleyball with the Women’s side being defeated but the Men’s got their win. Similar outcome with Basketball, the Men slipping to a narrow defeat but the Women’s securing a dramatic last minute victory.

A great victory for the Mixed fencing team as they secured a comfortable win. As the final fixture approached, the City Cheerleading club put on a wonderful display to showcase the success of their season with a performance worthy of a victory if this was a competitive show.

The final fixture saw the Netball 1st team finish their season with an emphatic victory over Kingston and this would be the icing on the cake as City have not been able to defeat Kingston at Netball in any of the previous Varsity events.

The series was concluded with an overall victory of 11-6 in favour of City.

More information will be released in the coming weeks, however you can stay up to date on Varsity and all things happening in Sport & Leisure by following us on Instagram.